**TRIGGER WARNING**This blog contains subject matter that could very well be triggering for some as it covers childhood sexual abuse and rape culture. My intention is to raise awareness and encourage other victims to let their voices be heard, NOT to offend, attention-seek, name call, blame or point fingers.
Thanks for taking the time to listen to my story.

6x6" is my most popular painting size, they are ready to hang and require little wall space to display a one of a kind creation! All of my 6x6 inch liquid art panels are on sale for $35, they can be delivered anywhere in MD at no cost  and gift wrapping is available for no addition. The frames can be painted metallic black or rose silver or left natural wood.
Note: The first three paintings below must have painted frames (because of paint on the wood frame). 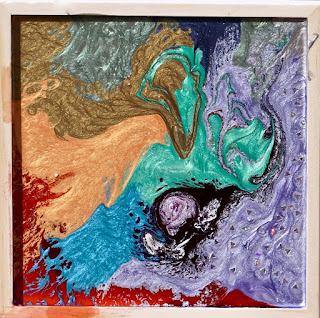 "the Hand that holds us" 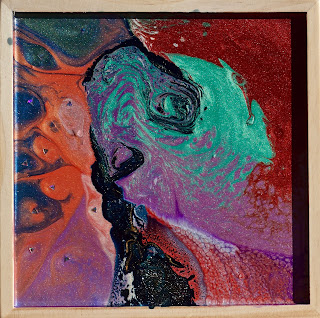 "ready when you are" 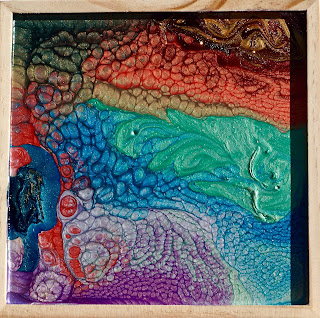 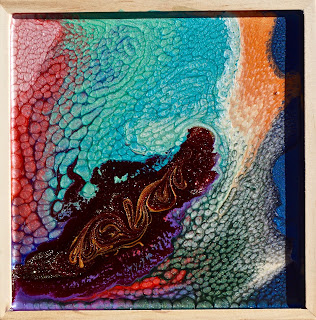 "glitter in my merlot" 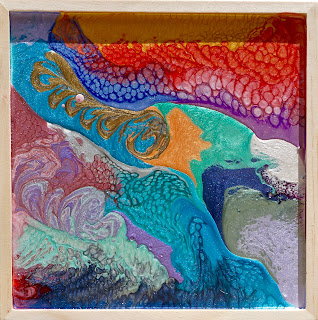 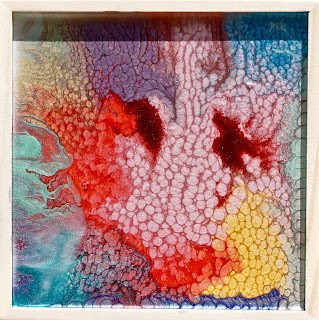 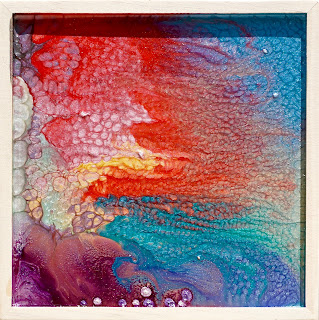 Putting myself back together

You left me looking over the edge,
questioning my own ability to jump
and let go.
I fell and hoped you would catch me.
Instead you retreated in fear.
I can't blame you though,
I was always the one to say
"my trauma makes me unlovable"

When I hit the rock hard ground,
I hit hard, feeling so much more than I ever have.
I watched as I broke into all these tiny pieces,
all these broken parts of me.

Some tried to flee,
throwing themselves over the edge with relief.
some parts started to fight amongst themselves,
while the others froze in fear;
all except one.

The light part glowed like no other light I have ever seen,
when I finally saw it, I could see nothing else,
I stared and then it started to speak,
"I'm here for you Dana. I have always been here for you all along, I never left and I never will. I am the spirit that lives within you. You have an important part to play and I can promise your pain and suffering has not been for nothing. You have been given your voice and the power of your words for a reason. You are irreplaceable in the great round, the role you will play is essential.You are to be the voice for the voiceless, the vulnerable, those made weary by their traumas, too wounded to stand up and fight this seemingly unremitting war.

You can't tell me this isn't a fight I can win..
I have already win,
by not letting what he did to me,
destroy my life.
It's my life to lead
and I choose to live it for Christ
and all the children like me,
who wish they never experienced that unwanted touch.
I want, no need to let them know,
what happened to them and us,
is not an uncommon crime,
they are not outsiders because it happened to them.
They are alive, they are breathing and they are growing.
I hope to save children from feeling as defective as I did growing up.
Posted by Unknown at 8:28 AM No comments:

Your life should matter most to you, before you involve someone else.

Love yourself before you can be part of a loving relationship.
Remember,
You need to not self-harm for your own sake, not for someone else's.
Posted by Unknown at 10:59 AM No comments:

Sexuality is not a need; IT'S A GIFT

You can not be secure in a sexual relationship until you are secure in your own sexuality and individuality.
Posted by Unknown at 10:57 AM No comments:

You can't live your life
and be a better person
if you blame other people.

Take responsibility for yourself!
Be confident in yourself!
And know what LOVE means to you.

Be confident in the future you can make for yourself.
Posted by Unknown at 10:55 AM No comments:

tell me a lie about LIFE that I haven't heard before and make it sound more convincing than the last.
Posted by Unknown at 10:54 AM No comments:

You asked, what does love mean to me?

"LOVE ME",
tell yourself
"I love myself"
"I am myself"
"I love being myself"

HE taught you self-hatred and denial
that is not the life YOU will lead.

REAL LOVE
is mutual caring, respect, honesty, truth;
being able to be your whole self with someone else.

NOTHING THAT WAS DONE TO ME COULD MAKE ME OTHERWISE.

I loved you, because I knew no other way of being.
I've felt the power of being loved,
and now the absence of it
shakes me life with terror.

Do not ask these questions of yourself;
ask yourself,
"At what point did it become so impossible to love myself???"

I fell in love with you
the first time
you looked into my eyes,

such expressive eyes,
a mind exploding with creativity.

A body also so familiar with the constant
presence of pain.

I knew in touching you I needed to be so delicate;
always afraid of going overboard,
never coming up for air.

I can't forget your taste or your touch.
I don't want to.

What you and I did together,
and what I showed you,
was so different,
from what he did to me.
Today he is this unwelcome presence that tells me
"YOU'RE NEVER ENOUGH"
That I am no one,
unless I can see myself
reflected in the eyes
of someone who loves me.

Who am I?
When this mirror breaks and I am surrounded by self-hatred.

I am no one but myself.
Always have been, always will be.
Posted by Unknown at 10:52 AM No comments: All handknotted with precious gems. I've been wearing both rose quartz and amethyst